Stirling Moss: My Hero Then & Always.

As a child, I lived in Manchester and had followed my father’s interest in motor racing from an early age. He had taken me to see the pre-war ‘Silver Arrows’ being demonstrated at Oulton Park, by Peter Collins and Tony Brooks, in 1958 and I pestered ‘the old man’ (he must have been all of 38!) to take me to a Grand Prix.

The family Austin A40 was loaded and we took the journey to Aintree on Saturday 18th July 1959 for the British Grand Prix. Even though I was only seven years old, I can remember it clearly; the times were changing and the new rear-engined Coopers were making their mark but ‘the boy’, as he was universally known by the cognoscenti in the light of his meteoric rise to fame ten years earlier, was there. 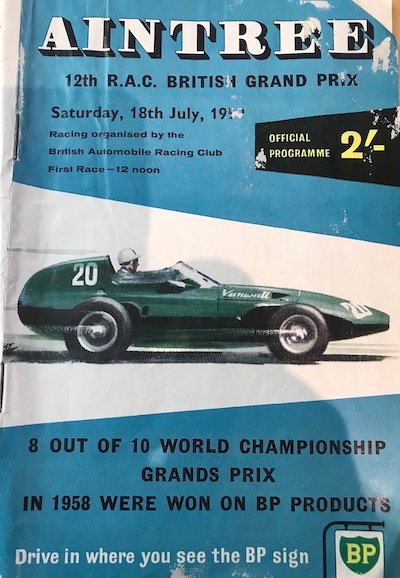 The programme featured Stirling Moss on the cover, albeit in last year’s Vanwall, and the darling of the crowd took his place on the grid in the BRM P25 carrying the pale green colours of the British Racing Partnership. How I willed the BRM to catch Jack Brabham that day but it was not to be, ‘Mossie’ finishing second to the Australian that day. 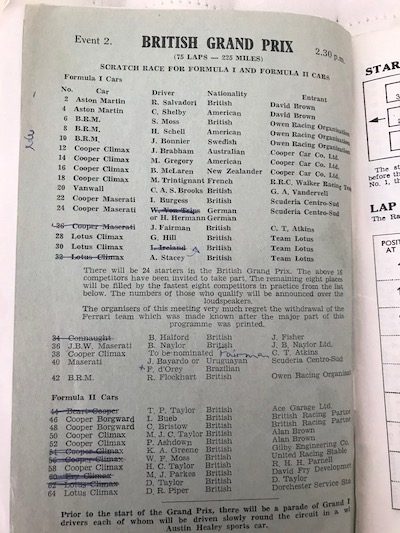 But a lifelong hero had taken his place in my affections. Communications were not then what they are now, and race results and news travelled slowly. We would frequently have to wait days for news, but it was always for me about Stirling.

There are few, truly great sporting heroes who only need to be recognised by a single name. It might by Botham in cricket or Pele in football and in our own sphere Senna and, particularly Fangio, needed no further embellishment. Stirling was always just that; Stirling. To fan or man-in-the-street he was just Stirling.

Standing at the chicane on Easter Monday, 23rd April 1962 this schoolboy had little idea of the horrors happening the other side of Goodwood circuit as Stirling cannoned into the bank at St Mary’s at apparently unabated speed. His life hung in the balance for over a month and it is hard to explain now, even with our wall-to-wall news, every newspaper published hospital updates for weeks, on the front pages, not the sports sections, just how Stirling was doing. I hung on every word.

Stirling had a try-out in a Lotus sports racing car as soon as he was reasonably able, but felt that he no longer had the magic touch, a decision he later regretted. How any comeback would have gone we will never know, but the times were changing and a new breed was in the ascendancy.

Whilst the Grand Prix ace was no longer racing, he began a new career as a ‘celebrity’ (in the true sense of the word), travelling the world working in television, making public appearances and growing still further the brand that was Stirling Moss.

It was during these times that I got to meet him many times. I am not easily star struck, in my line of work you can’t be, but every single time I met him I would think to myself “I am actually talking to Stirling Moss”. As the yoof of today would say OMG!

In later years Stirling cut out a new niche for himself in historic racing and, in particular, at Goodwood. I remember standing in the pouring rain at Lavant Corner, soaked to the skin, whilst Moss put on a virtuoso performance in a Maserati 250F. Heaven!

I was in the commentary box at Le Mans in 2011 when Sir Stirling announced his retirement live on air to our pitlane reporter Joe Bradley during qualifying for the historic support race. Typically, he said that he had never been scared in a racing car up until then but ‘now I get the shits when I’m out there’, so I’m stopping right now’.

I was sitting next to my old chum Chuck Dressing, every bit as big a fan as I am, and his face mirrored mine as our chins hit the ground. It was a mixture of pride (in being part of the announcement), relief that he had decided to retire whilst still in one piece (at 81!) and sadness that we had seen him race for the last time.

Stirling was ‘one of the good guys’. Whilst history has lumped Stirling Moss, Mike Hawthorn, Peter Collins et al into a devil-may-care fun loving, girl chasing group, Moss was not actually one of that gang. Hawthorn’s friends were like WW2 fighter pilots and largely behaved in a way that would be completely unacceptable today, but Stirling Moss was always aware of his reputation and also his need to be physically and mentally as fit as he could be.

That ‘brand awareness’ continued for the rest of his public life. Always courteous, he prided himself on never having refused to give an autograph.

Which takes me back to the star struck youth. After the horrors of his 1962 accident, Stirling still turned up at Goodwood as a spectator for 1964’s edition of the Tourist Trophy. He stood chatting to Innes Ireland in the paddock and I hesitantly approached them for their autographs. My programme signed, I went home happy. 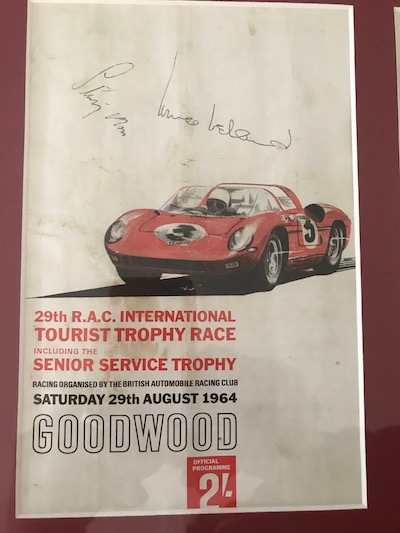 Scroll forward 45 years and Goodwood used a facsimile of that 1964 programme for the Revival race card. I duly found the great man and asked him to sign the 2009 version, just as he had done in 1964. He found it hilarious and happily signed it, making a few comments, typically, about which of us the years had been less kind too. 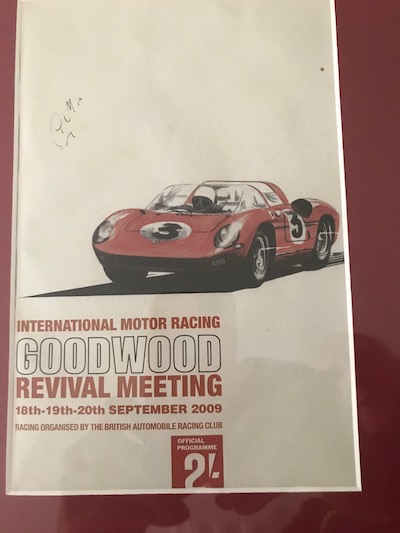 We all knew that this day was coming and, as a journalist, I should have written something about ‘the boy’ ages ago, but it just didn’t seem right. Stirling was immortal, countless racing accidents which would have seen lesser men give up, his dreadful fall down his lift shaft at home and then, more recently, his illness had all been survived. But now he has gone. It is hard to mourn a great man of 90 who has slipped away after a long illness because, in spite of everything, this was inevitable. We grieve for those he has left behind and for the thousands, no millions, of people whose lives he touched. Including me.